In pictures: Preventing the spread of anthrax among Maasai communities in Kenya 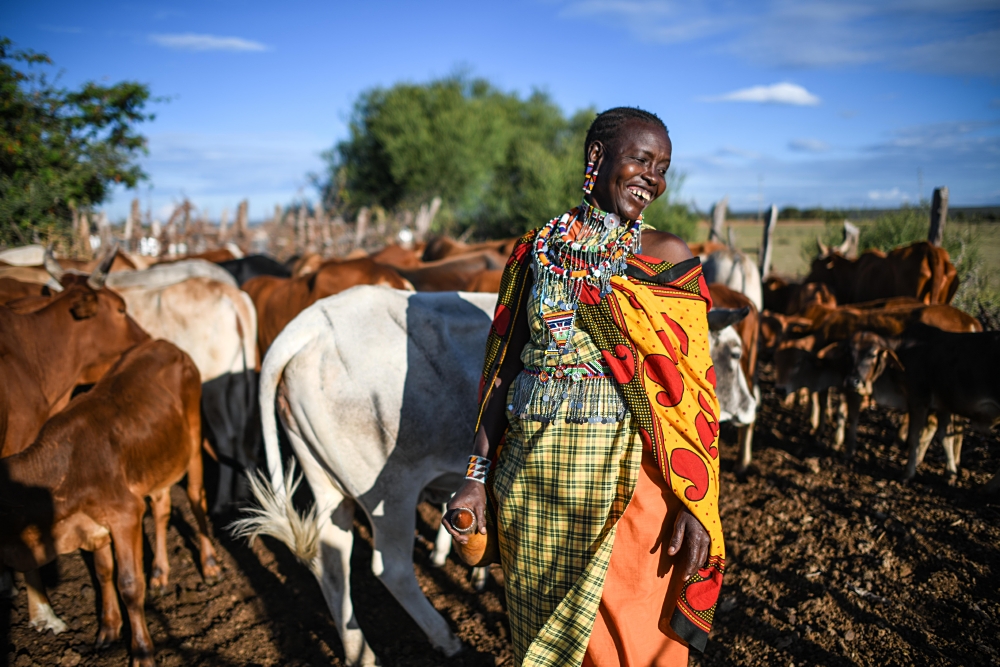 Kenya Red Cross has been ramping up to help communities stay protected against an anthrax outbreak that has long been spreading among pastoralist communities in Kenya. Because of the stigma and lack of reporting at community level, most cases go undetected, putting many more at risk.

But this is beginning to change. For the first time ever, more cases are being brought forward to authorities and responded to, through Kenya Red Cross’ work to build community-based surveillance. In addition, more than 24,600 targeted vaccinations of livestock have taken place to protect against anthrax due to these reports.

Why is anthrax cases found in Maasai communities?

For the Maasai people in Kenya, cows are an intrinsic part of their culture and daily life. Cattle are not simply an income source, but a way of life – they are a symbol of wealth, pride and prosperity. However, this close connection with livestock can also put them at risk of zoonotic diseases, particularly anthrax which has been a recurrent outbreak in Kenya for decades.

Cultural practices among the communities often expose them to the diseases, such as cutting open an animal who has died of a disease, locally diagnose the cause of the animals’ death. Occasionally if the diagnosis by the community does not seemingly look bad, they end up eating the carcass further risking the community members especially if they miss the correct diagnoses.

“One health”: Our collective response

Kenya Red Cross with the support of IFRC and USAID, has been ramping up epidemic and pandemic preparedness to strengthen communities’ resilience – including the Maasai – during and after the epidemics. Focusing in Bomet, Narok, Tharaka-Nithi and West Pokot, Kenya Red Cross is working with governments (Ministry of Health and Ministry of Agriculture, Animal Industry and Fisheries), communities, schools, volunteers, local responders and humanitarian partners to collectively prepare for and respond to epidemics.

Because more cases have been reported, it has also meant a stronger collective response from communities, volunteers, health professionals and veterinarians. Instead of the Maasai and other pastoralist communities eating animals that have been infected by anthrax, they are now calling authorities and disposing of carcasses properly. They are also ensuring their animals are properly vaccinated. Communities are taking up better hygiene practices, including washing hands and properly cooking meat before consumption.

Naisanta Loso, 13, is a student in Nkoilale Primary School in Narok County, Kenya and a part of a school club, supported by the Red Cross. This club empowers students to become “champions” in preventing, detecting and responding to disease outbreaks.

At the end of 2019 alone, anthrax killed two people in her community, countless livestock and caused many others to get sick. 26 cases of Anthrax have been brought forward and rapidly responded to thanks to students like Naisanta who helped their community dispose of Anthrax-infected cows before people could get sick.

According to Naisanta Loso, when cattle die, the Maasai herders open the dead carcass and traditionally diagnose the cause of the animal’s death. In the process, the community becomes contaminated with the disease.

Peter Korir, Naisanta’s teacher, helped Naisanta report a case in her community. Together with Naisanta, a veterinary officer was called and the cow was buried. As a key player in community health education, Korir is instrumental in designing and providing community and epidemic and pandemic preparedness through a health club at the school.

Changing cultural behaviour can get challenging, however, with interactive learning, teachers can make their learning fun, engaging and attractive. During the health club session, Mr. Korir passes key messages about the infectious disease through an interactive storytelling approach. The students learn through traditional songs, poems and skits.

“I encourage my students to report any case of anthrax.  Prompt reporting of suspected cases may potentially reduce the contaminated of the affected community,” said Mr. Korir.

It is during these interactive sessions that Naisanta has learned more about anthrax and how to prevent it. She has transferred this knowledge on to her family and community members.

“My community value cows. It was not easy to convince the community to dispose of a dead cow suspected to have died of Anthrax,” Naisanta said.

“Today, my community ensures cows suspected to have died of anthrax are buried to prevent further infections.”

Truly, as the African proverb says if you educate a woman, you educate a nation. Education is the most powerful weapon which we can use to change the world.